Due to the weather, the closure on Olive Street north of Lincoln Avenue was postponed until Monday, Feb. 22 through Friday, Feb. 26 . NIPSCO is working to relocate a gas main in this area, and crews will need to remove and excavate underneath the roadway. Traffic will be detoured onto Steury... more

Freedom Fest 2018. Photo Credit: Alaina Gingerich Goshen’s annual air and fireworks show that takes place at the Goshen Municipal Airport and is attended by thousands of residents, will be pushed back until further notice this year. Organizers of America’s Freedom Fest announced today, Feb. 19,... more

Olive Street is expected to be closed just north of Lincoln Avenue next week beginning Tuesday, February 16, through Friday, February 19 . NIPSCO is working to relocate a gas main in this area, and crews will need to remove and excavate underneath the roadway. Traffic will be detoured onto Steury... more

The City initiated a traffic study on Main Street to see how four-way stops at Clinton, Washington and Jefferson would impact traffic now that the City has taken control of Main Street. The study began on May 1st and was expected to continue until May 31st.

The vast majority of the feedback the City has received has been from pedestrians as they are very concerned about their safety during this study and have found it more difficult to cross Main Street with the four-way stops. Vehicles are not stopping for pedestrians and are not looking out for them when moving through Main Street. The comments that we have received from motorists have been mostly positive stating that they find it easier to get around downtown and it seems more motorists are moving to Third Street to get through downtown.

Due to the pedestrian concerns, we will be ending the study earlier than originally proposed. The study will end tomorrow, May 14th, at approximately 9am by returning the traffic signals to their normal function at Clinton, Washington and Jefferson. There will likely be further studies in the future once Main Street is reduced from four-lane to two-lane and additional pedestrian improvements can be made.

Historically, this time of year is when Goshen experiences the most flooding events. The city has accumulated a fair amount of snow that will equate to approximately an inch of water as it melts. With the rising temperatures this weekend and early next week, we will see a good deal of melting and the water will be looking for a place to go. Luckily there is not a substantial amount of rain expected but any that does fall will add to the melted snow totals.

At this point, city crews are working to clear storm drains but many are still covered. In addition, the ground is frozen and will not soak up any additional moisture. The city is monitoring the situation in hopes of avoiding any flooding. In an effort to be proactive, the Street Department has sandbags available this afternoon for any Goshen residents who may need them and they will be available throughout the weekend, as well.

Keep an eye on the City of Goshen, Indiana facebook page and our website at goshenindiana.org for any updates regarding the weather and further preparations in the event of flooding.

The sleet and snow falling this morning have created icy conditions on our local roadways, sidewalks, and driveways. As you deal with these icy conditions please consider the impact salt and sand can have on the local environment, both plant life and water quality. Keep in mind these simple tips:

– Pre-treat pavement with a small amount of liquid deicer.

– Remove snow before it becomes ice or use a scraper or metal shovel to remove the ice.

– If the pavement is too cold (less than 15°F) rock salt will not work and alternatives like sand or birdseed for traction or other deicers like magnesium chloride or calcium chloride can be used.

– Use only the amount of salt and sand you need and sweep up any extra. 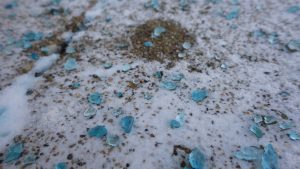 City Street Department crews are working hard to clear the roadways in response to this morning’s weather event. We are asking for the community’s assistance and support in two ways as we continue our work:

Winter weather has definitely arrived and we thank you in advance for helping us and using extra caution while clean up is underway.

Due to the 4th of July holiday, and to prevent as much confusion as possible, the City of Goshen and Borden WasteAway wish to remind residents that the garbage collection schedule for July 4, 5 and 6 will be delayed by one day. For example, the normal Wednesday route will be collected on Thursday, etc. Normal collection schedules will resume on Monday, July 9, 2018.

Independence Day is observed by Goshen’s City and Utility employees, and all offices are closed on Wednesday, July 4. Offices will re-open on Thursday, July 5 at normally scheduled times.

As the fireworks displays continue for the Independence Day celebration, it is important that Goshen residents be aware of fireworks regulations. A local city ordinance was adopted in 2007 at the urging of residents concerned about neighborhood safety and noise. Regulation is controlled by parameters imposed in state legislation.

Consumer fireworks are allowed by state legislation and local ordinance from 5:00 p.m. until two hours after sunset (or until approximately 11:20 p.m.) thru July 9, except July 4 they are allowed from 10:00 a.m. until 12:00 midnight. Any other times require Board of Works approval and must be on real estate owned by a government entity. Fines for violations may be up to $500 per incident. To report a violation of the fireworks ordinance, citizens are welcome to call the non-emergency dispatch phone number—533.4151. The caller must supply an exact address of where the violation is occurring in order for a police officer to respond effectively to the call.

Local regulations apply to “consumer fireworks” as defined in state statutes. Such fireworks include certain small ground or aerial devices designed to produce visible and/or audible effects by combustion. They are required to comply with the construction, chemical composition and labeling regulations of the United States Consumer Product Safety Commission under 16CFR1507. Ground devices (firecrackers, salutes and chasers) are limited to 50 milligrams of explosive composition. Aerial devices (sky rockets, missile type rockets, helicopters or spinners, roman candles, mines and shells) are limited to 130 milligrams of explosive composition. Larger devices are not allowed under local ordinance and require state permitting.

The City of Goshen, in partnership with the Salvation Army, Maple City Chapel and Elkhart County Emergency Management, is working to provide resources for residents during this weekend’s extreme heat event.

The National Weather Service has issued an Excessive Heat Warning for Elkhart County beginning at 12:00 p.m. today that will remain in effect until 8 p.m. Sunday. They are considering this a “Long Duration Extreme Heat Event” with temperatures rising into the mid-90’s today and lasting through Sunday with heat indices of up to 110 degrees. Temperatures will only drop into the 70’s at night with continued high humidity. They have also issued an Air Quality Alert as the ozone levels are expected to be dangerously high.

Three cooling centers have been set up for the community. Anyone in need of an air-conditioned room during the day may go to any of the available locations to escape the heat:

In addition, entrance into the City’s Shanklin Park Pool (411 W. Plymouth Ave.) will be free this evening through Sunday. Pool hours will be as follows and patrons must be in appropriate swim attire to be admitted into the facility. We encourage the community to utilize this resource as a means to stay cool throughout the weekend.

Mayor Jeremy Stutsman thanks both the Salvation Army and Maple City Chapel for opening the doors to the public in this time of need as well as Elkhart County Emergency Management for their assistance in providing resources for the cooling centers.

“I strongly encourage anyone in need to take advantage of these community resources throughout the weekend,” he said. “I would also urge the community to look out for one another. Please check on your loved ones, neighbors and friends, especially the elderly, and take them to the shelter if they need it.”

The combination of extremely hot temperatures and high humidity will lead to an increased risk of heat related stress and illness. The public is advised to drink plenty of water, stay in an air-conditioned room, stay out of the sun and check on relatives and neighbors.

Arrangements for honoring Chief Wade Branson have been confirmed.

A procession upon the conclusion of the funeral will proceed past the Goshen Police Department and continue to West Goshen Cemetery.

The passing of Chief Wade K. Branson has created a ripple effect of emotions far beyond the community of Goshen. Family, friends, City of Goshen staff, community members, acquaintances, other police agencies, and other communities, (the list goes on and on) have reached out to show their support for a truly amazing human, to his family, to his brothers and sisters at the PD and to our community. This support helps during a difficult time and means more than you know. On behalf of the community of Goshen I thank you for this incredible support!

Saturday June 30th Chief Branson’s service will be held at 11:00am at Grace Community Church. We have come to realize there is no facility in Goshen that will be able to handle the crowd that wishes to attend and pay their respects.

I would like to encourage everyone who is unable to attend the service to join your fellow community members along the procession route to pay your respects to Wade and show your gratitude to his family for all of his years of selfless service to Goshen. This will mean so much to the family and all involved. The procession will most likely begin around 11:50am-12:10pm (The safest place to do this is on a sidewalk or Main Street in Downtown Goshen).

A Petition for Annexation into the City of Goshen has been filed with the Goshen Common Council requesting the annexation of certain real estate located outside the corporate limits of the City of Goshen.  This area is identified as the “Goshen Community Schools Annexation Area” and consists of approximately 37 acres of real estate generally located north of State Road 119, west of Greene Road (County Road 19), and south of Berkey Avenue.  The Goshen Common Council will conduct a public hearing on the Goshen Community Schools Annexation at its regular meeting on August 7, 2018 at 7 p.m.  The hearing will be held in the City Court Room/Council Chambers at the Goshen Police & Court Building, 111 East Jefferson Street, Goshen.  All interested members of the public are invited to attend and will be given the opportunity to testify on the proposed annexation at the public hearing.